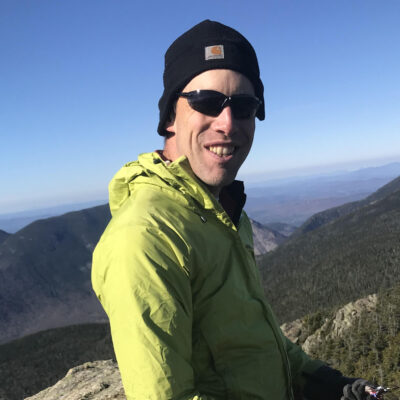 “The high resolution simulations Duveneck is developing will go a long way toward predicting local patterns of resilience and change on a scale that is relevant to managers.” Kate Miller, National Park Service

The forests of Acadia National Park, protected for more than a century, are home to a diversity of trees, plants, and animals. How climate change, insects, land use, and other disturbances will interact and shape Acadia’s future forests remain largely unknown. Park managers face threats such as invasive shrubs and damaging insects, and models predict dramatic but conflicting shifts in future forest conditions.

Matthew Duveneck contributed to a previous study of forest change in Acadia (which also involved Fellow Jenny Smetzer). However, this previous assessment covered all six New England states at a coarse resolution. For this fellowship research, Duveneck will focus modeling questions (using LANDIS-II /PnET-Succession model) at 30 meter resolution at Acadia, and incorporate more specific details about local soils, forest composition, management, and climate. He plans to use Fellow Jay Wason’s spruce plots to help assess forest age, as well as data from the National Park Service Northeast Temperate Network forest health monitoring. After refocusing the model, he will simulate the outcomes of different management scenarios.

The scenarios will be identified in collaboration with park staff, but might include addressing such question as: Should managers expect red spruce in Acadia to transition to other dominant species in the next 100 years? What will happen to hemlock forests following mortality from the hemlock wooly adelgid? How will forests respond to a future unknown parasite? Where should managers resist, accept, or direct the future forest?

“How the spruce forests in Acadia will respond to climate change is an open question,” said Kate Miller, Quantitative Ecologist with the National Park Service, who coordinates forest monitoring in national park sites from Maine to Virginia. “The high resolution simulations Duveneck is developing will go a long way toward predicting local patterns of resilience and change on a scale that is relevant to managers.”

Currently on the faculty at New England Conservatory, he also holds a part-time research appointment at Harvard Forest. These positions allow for creative and impactful communication of science. He helped a music student whose capstone project, “Listening to Future Forests,” developed a sound-scape of a simulated hemlock forest affected by climate change and hemlock wooly adelgid.

“Alternative scenario model results like those I have simulated are well poised to aid in science communication,” said Duveneck. “Threats to future forests represent stories that are embedded in uncertainty. Embracing this uncertainty and simulating plausible scenarios will provide links between the knowns (for example, photosynthesis rates) and the unknowns (for example, future insects).”