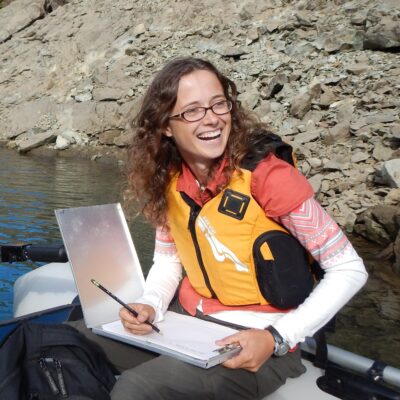 "The results of this study will help us understand how non-native fishes are affecting Acadia’s lakes, and how they might influence wildlife exposure to mercury and similar contaminants in park ecosystems.” - Bik Wheeler, Wildlife Biologist, Acadia National Park

Introducing new and different fish species to lakes and ponds can have far-reaching consequences. The presence of “new” fish species can re-structure lake food webs, altering the flow of energy, and potentially contaminants like mercury, through ecosystems.

Fish in many of Acadia National Park’s lakes and streams have surprisingly high concentrations of toxic mercury. This project builds on the extensive research into the park’s mercury problems, adding new information about food web relationships and the role of invasive fish species. This new information will guide future actions to protect park ecosystems and human health.

Acadia’s lakes and streams are home to 14 native, and 9 non-native, fish species, the result of past stocking activity by state and federal fisheries managers and accidental introductions. Every lake has a different community of fish and therefore different interactions between species.

Introduced species can force native species to shift their diet, which can have a ripple effect through the ecosystem. For example, an introduced fish that eats swimming insects can force native fish to switch to eating bugs from the bottom of the lake, leaving fewer bugs available for spiders that hunt this prey along the water’s edge. This can change relationships across habitats, and alter related processes. For example, as the spiders shift their food source, they may consume more or less mercury, which birds take up when they eat the spiders.

It is unclear how predictable these patterns might be because each lake has a unique array of species.

Murphy is focusing on five ponds (Aunt Betty Pond, Eagle Lake, Jordan Pond, Lake Wood, and Long Pond) that have been previously studied as part of the Dragonfly Mercury Project and that have recorded data on stocking and historical fish populations. Murphy and her U.S. Geological Survey partners will collect aquatic insect larvae and other invertebrates. They will collect fish with nets and traps and sample fin tissue.

Then, using traps, sweep-nets, and mist-nets, Murphy will sample insects again as they hatch and emerge later in the season, and, working with Second Century Stewardship Fellow Allyson Jackson, take blood samples from lakeside birds that may be eating the insects.

Samples will be carefully packaged into small tins and sent to Utah State University’s SIRFER laboratory to be analyzed for certain forms of carbon and nitrogen (stable isotopes) that when traced through food chains with computer models can be used to “map” the food web and show how different assemblages of fish species influence food web patterns, including bird diets. Murphy will also be looking at whether the species of fish present in these lakes may also be changing over time.

“The results of this study will help us understand how non-native fishes are affecting Acadia’s lakes, and how they might influence wildlife exposure to mercury and similar contaminants in park ecosystems,” said Acadia National Park wildlife biologist Bik Wheeler. “Right now we don’t know much about our invasive fish and their impacts. This study will help fill that critical gap.”

Information on food webs can help assess the stability of ecosystems in the park, as well as help park managers understand potential effects of a changing climate. For example, the impact of introduced fish species could intensify as increasing temperatures favor warm-water fish.