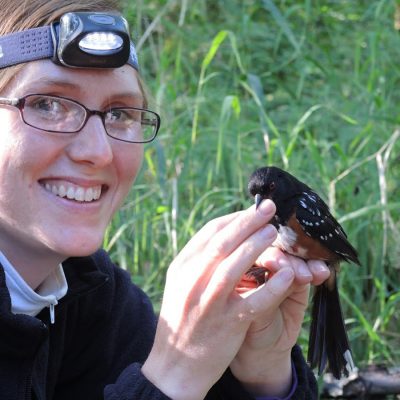 “I benefited from the SCS communications workshop last summer. I think it is an invaluable tool to educate, excite, and make people consider ecology and science in their everyday lives. This summer, we have a website and blog, and use Facebook, Twitter, and Instagram - all of which I probably wouldn’t have done without the support from the communications workshop. I really enjoyed the workshop because I got to know the other SCS Fellows and participants, many of whom I continue to work with.”

Despite its beauty and wildness, Acadia National Park is affected by air pollution that originates far beyond the park’s boundaries. The wind and weather systems that travel west to east across the United States carry emissions from coal-fired power plants and other industries. While policies like the Clean Air Act have helped to reduce some contaminants like acid rain, other forms of pollution continue. Mercury is particularly problematic. A potent toxin that affects reproduction and behavior in wildlife and can impair human health, mercury easily moves from the air into lakes, streams, and wetlands. Once there, mercury can accumulate to toxic levels in top predators–even beyond aquatic systems as birds and other predators eat insects that emerge from the water. To date, most research in Acadia has focused on documenting the extent of mercury pollution and less on how it moves through the food web, and so managers still don’t know if mercury is impairing park wildlife.

Allyson Jackson, bird biologist and an assistant professor of environmental studies at Purchase College in New York, wants to understand how much birds rely on aquatic insects as a food source, and how much they are being exposed to mercury in the process. “This pulse of resources out of the aquatic system and into the surrounding area creates a rich food source for animals living near the water. Insects take flight from the water at a critical time in the spring, before other prey like caterpillars and beetles become plentiful on land,” she said.

Working with the ongoing Dragonfly Mercury Project, Jackson recruited 69 citizen scientists (who contributed a total of 268 hours of work) and seven college students to help sample insects and birds every week in spring and summer at four different sites in the park. “This project links tangible, citizen scientist-led data collection with an invisible pollutant that cannot be seen by park visitors,” she said. She also wanted to get people out in the park, doing science. Data were posted to the Acadia Bug Project website each week, so volunteers could view and interact with the information they helped collect.

“I want to provide transformative experiences for citizen scientists by not just educating them about my research but by making them critical members of my research team,” said Jackson.

Documenting, understanding, and protecting food webs now is critical as park staff manage dynamic ecosystems in the second century of stewardship at Acadia.