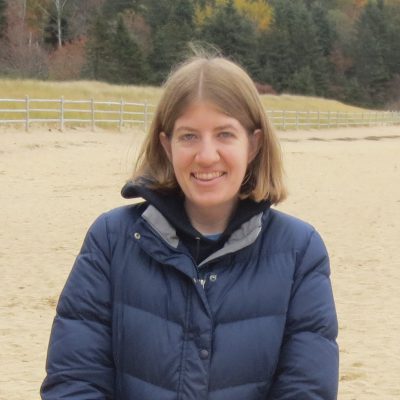 “The SCS Fellowship already has facilitated valuable research and outreach collaborations for me with NPS scientists, that will lay the foundation for my long-term research efforts on tick-borne disease ecology and management in public natural areas. The funding provided by SCS is supporting a graduate student and an undergraduate student in my lab, both of whom are delighted to pursue their independent research experiences in a beautiful part of the state with a network of outstanding scientists.”

Maine has seen a five-fold increase in incidence of Lyme disease over the past decade, while several other emerging tick-borne diseases (e.g., anaplasmosis, human babesiosis, Powassan virus) are on the rise. Warming temperatures are likely boosting the survival and spread of black-legged ticks, the vector of these human diseases. Residents of the Acadia region recognize the growing burden on human health posed by ticks, and a majority of visitors are concerned about exposure to tick-carried diseases. National Park Service staff are interested in ways they might be able to manage habitat to reduce the risk of Lyme disease.

Allison Gardner, an entomologist and assistant professor at the University of Maine, is researching the distribution of the black-legged tick and Lyme prevalence in Acadia, and how both are influenced by forest characteristics and fire. By altering vegetation, fire may affect the abundance of tick hosts like chipmunks, mice, and deer. Acadia’s history of fire provides a natural experiment to study this question. For example, the Fire of 1947 dramatically altered the structure and species composition on more than 10,000 acres of forest on Mount Desert Island, as aspen and birch replaced spruce-fir forest. “We think that this historical legacy of disturbance increases the density of infected tick nymphs relative to areas of the park that were unaffected by the fire,” said Gardner. The leaves dropped by the aspen and birch create a forest floor environment conducive to the survival of ticks and their small-mammal hosts. Fire is also used deliberately to manage vistas in Acadia, often along roads and other areas of the park with high public visitation. Controlled burns have been proposed as a method to suppress ticks, and several studies found a decline in tick abundance one year following controlled burns. However, no one has studied the effects on ticks beyond a year. After an initial decrease, tick abundance may actually increase in the longer term after controlled burns because they create shrubby edge habitat ideal for white-tailed deer and mice.

Gardner sampled ticks at 1947 burned and unburned sites, and at areas in the park that are on a rotating cycle of prescribed fire management. Gardner, graduate student Sara McBride, and undergraduate Lucy Guarnieri counted ticks on small mammals caught in live traps, looked for deer scat, and measured conditions such as temperature, humidity, leaf litter depth, and vegetation density. Ticks will be tested for Lyme disease in a laboratory.

“Allison and her team aim to answer the question of why some places promote higher Lyme disease infection rates and others seem to have lower infection rates, while being informed by the unique land history of Acadia. This is really important information for us to have, because it influences where visitors are at the highest risk of contracting a tick borne disease and what we can do about it,” said Bik Wheeler, Acadia National Park wildlife biologist.

In the meantime, Gardner has also begun a collaboration with social scientists at the University of Maine to understand human risk of exposure to tick-borne diseases by studying awareness, preventive behavior to protect against tick-borne disease, and changes in seasonality of park visitation. Ultimately, they hope to generate projections of Lyme disease risk in the future. The results will help National Park Service resource managers and veterinarians, and public health and nature-based tourism researchers, to refine management and education practices related to fire and tick-borne diseases.