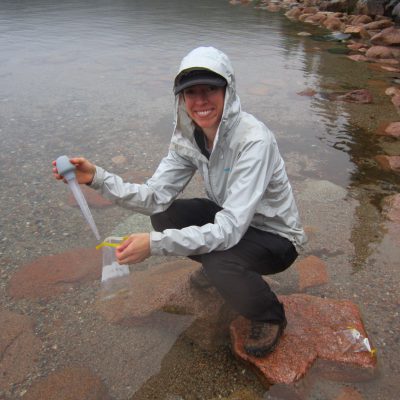 “The SCS Fellowship has allowed me to connect with other researchers and managers, leading to exciting collaborations and next steps in my own research. I have also been able to expand the impacts of my research through presentations to local high school students, National Park Service staff, and the Jackson Laboratory in Bar Harbor, Maine.”

Acadia’s forests and streams are among the defining features of the park, and are home to unique communities of plants and animals. Information about them can help scientists and park managers decide what actions, if any, are needed to address threats such as changing climate, invasive species, and pollution.

Biodiversity, the number and relative abundance of different species in a place, is one way to evaluate the overall health of an ecosystem. Inaugural SCS fellow Abbey Paulson of the University of Colorado used environmental DNA surveying methods to get a relatively rapid and broad portrait of diversity that has been mostly unseen and unknown to scientists and managers.

For example, in the network of roots beneath the forest, an entire universe of bacteria, fungi, and other microscopic organisms support tree growth and survival, helping chemical signals, nutrients, and carbon move through the forest ecosystem. But the individual species providing these functions are largely anonymous, and so there is a great gap in knowledge of the forest itself.

Paulson surveyed forests across Acadia, taking 63 soil samples from sites at Isle au Haut, Mount Desert Island, and the Schoodic peninsula, in locations that are part of National Park Service’s long-term monitoring network. She processed the samples using new molecular techniques that can identify species based on mere fragments of cells. While she didn’t find a lot of difference across the park, she did find that aspen-birch forests and spruce-fir forests had very different soil communities.

Paulson also wanted to see if she could detect impacts of road and trail crossings on Acadia’s streams. Where stream flow is interrupted or blocked by bridges and culverts, fish and other aquatic animals can have trouble moving upstream and downstream. Paulson sampled water from above and below roads in Cromwell, Kebo, and Marshall brooks. She analyzed the samples for microbial and arthropod DNA, but found no differences within streams. However, she did find that biodiversity in streams in the more urbanized area near downtown Bar Harbor was very different from undeveloped streams in the park.

The results of this study provide baseline information on patterns of biodiversity, the “hidden life” of Acadia’s forests and streams.

“This work supplements the existing baseline sampling conducted by the Park,” said Brian Henkel, Wild Acadia Project Coordinator. “The Northeast Temperate Network provides Acadia with long-term monitoring and periodic inventories of the flora, fauna, air, and water to improve our understanding of the health of the biological communities, changes to that health, and potential reasons for any change.” It is impossible to sample everything everywhere, but Paulson’s approach, combined with existing monitoring programs, can show changes in biodiversity over time, helping resource management staff determine if future interventions may be necessary to protect  Acadia’s ecosystems.