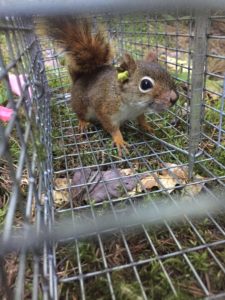 WINTER HARBOR, Maine – Squirrels, mice, and other small mammals could influence whether or not trees spread to new areas in a warming climate, according to new research published in the journal Oikos.

The future range expansion of plants and animals is a major topic of study and speculation. As the climate continues to warm, trees will be able to grow in new areas that had previously been unsuitable. In areas like Maine, where forests support major industries including tourism as well as providing wood and other materials, foresters and land managers want to know more about the changing makeup of the forest. According to the new research, they may need to look beyond the trees.

Alessio Mortelliti, assistant professor of wildlife habitat conservation at the University of Maine and lead author of the study, studies the behavior of small forest mammals that eat acorns, pine nuts, and other tree seeds. By choosing certain seeds and rejecting others, these animals can alter the trees that make up a forest. If they eat all the seeds in their territory—which they are capable of—those seeds can’t grow into new trees. On the other hand, chosen seeds that are carried away and “cached,” or stored for later, and then forgotten can germinate some distance away from their parent tree.

But how will animals react to “new” or unfamiliar seeds of warmer-climate trees? “The way in which seed predators contend with the novel seed or fruit, and the way in which this interaction subsequently unfolds could have dramatic consequences on a plant species’ successful establishment in the new ecosystem,” wrote Mortelliti and collaborators Ilona Grentzmann, Shawn Fraver, Allison Brehm, and Samantha Calkins from UMaine and Nicholas Fisichelli from Schoodic Institute at Acadia National Park.

Mortelliti conducted the research in Acadia National Park as part of a Second Century Stewardship fellowship from Schoodic Institute, the National Park Service, and the National Park Foundation. Acadia is particularly suited to studying shifts in plant distribution because some 64 species reach their northern limit just to the south of the park (12 to 24 miles away). 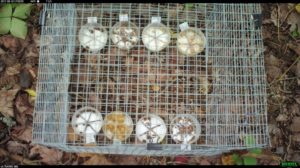 To understand the extent to which the future forest will depend on the choices made by squirrels, mice, and voles, Mortelliti and his team set up a “cafeteria-style” experiment. They placed familiar and unfamiliar seeds from 18 different types of trees in small cups inside a wire cage and, using infrared cameras, watched the seed-choosing, seed-eating, and seed-carrying behavior of red squirrels, deer mice, white-footed mice, voles, shrews, and flying squirrels. “New seeds were not ignored, and in some cases they were preferred,” said Mortelliti. “This is the first time this had ever been tested.” Along with their typical favorite white pine and red oak, the animals favored unfamiliar seeds from scarlet oak, swamp white oak, black oak, and black gum (tupelo).

Measurements of weight, shell thickness, and nutritional content showed that the preferred seeds, whether strange or familiar, were larger with harder shells, and were carried farther away (as shown in another part of the study that tracked tagged seeds). Being stored, or cached, means warm-adapted trees would have the opportunity to grow. But would they even sprout in Acadia?

An experimental planting of 1,810 seeds in separate plots on the Schoodic Institute campus found that the larger seeds, no matter the species, were more likely to germinate. “This part of the experiment excluded small mammals from study plots and many of the southern species germinated and established in similar numbers to the northern species. The climate is suitable for seedling establishment if the seeds, aided by small mammals, can arrive on site,” said study co-author Fisichelli of Schoodic Institute.

According to Mortelliti, all available models on plant range expansion ignore the role of small mammals. “Our field research shows that we cannot ignore their role,” he said. “Small mammals will happily interact with seeds they have never seen before and they have clear preferences for larger seeds and seeds with thicker shells.”

“Alessio Mortelliti’s work to understand the ‘psyche’ of small mammals and the ecological consequences, such as their reaction to novel food, is very exciting and innovative,” said Malcolm Hunter, professor of wildlife ecology at the University of Maine. “The researchers have revealed fascinating details about how species will shift ranges in response to climate change.”

Mortelliti plans to continue studying animal-plant interactions in Maine and is currently focusing on how small mammal reactions to unfamiliar seeds will vary among different individual animals.